Tuesday night we had a huge windstorm hit pretty much the entire Pacific Northwest.  I wouldn’t have been surprised to see a witch flying by on a broom…..Power went out for hundreds of thousands of people all across the area.  When I got home on Tuesday night with no power I really felt like sharing what was going on but was also trying to conserve battery power on my phone so I wrote out my feelings the old fashioned way, pen and paper.

I’m writing by candlelight.  If it weren’t for the sirens and creepy noises in the hallway this would almost seem romantic.

It’s like windmegedon here.  I was so thankful just to make it home.  Power went off about 10 minutes before 5:00.  One intersection still had power but the next did not luckily when I went through everyone was playing by the rules of the 4 way stop.

Once home realized I didn’t know how to get into my garage, thankfully google helps.  Charged my phone for a bit in the car so it’s over 50% but I’m conserving power because I don’t know when the power is coming back.

James the cat attacked the air mattress again (I’m sure it provoked him) so it’s slowly deflating but I can’t find the leak in the dark or inflate it even if I found the leak so I’m happy to have a couch….and candles, although they’re all scented so it smells like Bath and Body Works exploded in here.

Tonight is usually trivia night but there’s no power at the bar plus I’d already make up my mind I wasn’t going to drive 30+ minutes in a wind storm to play trivia, just not that crazy.

Thankfully the noodle tofu thing I made the previous night wasn’t too bad cold.

Here I just began randomly writing things I was thankful for:

Thankfully I have lots of candles, lots of blankets, got the car in the garage, I have a couch, I have pretzels, running water, nowhere I have to be tonight.

My power was out for over 24 hours.  I was happy/scared when I pulled into my apartment complex last night because half was lit and half was not so I had to keep my fingers crossed that I was in the half with the light.  I was so relieved to pull up and see lights in the hallways of my building.

There’s still several buildings in my complex without power and it’s now Friday so despite the craziness of this week I’m extremely grateful for lights and heat.  I should have a couple posts out this weekend but I have so much stuff to get done….but I’m going to worry tomorrow.  Tonight it’s wine, snacks, and movies.

Hope everyone has a lovely weekend!

**For some reason this posted then disappeared.  I was not happy but now I can at least have a sense of accomplishment for figuring out to restore a revision of a post and hopefully this works**

This is going to be short and sweet, like me 😉

Tonight I came home and even though I’m not super hungry I know I need to eat dinner so after contemplating eating just bacon I decided to find something with more sustenance.  I realized my tofu is going to expire so I decided to make some ground beef tofu but what to go with it is the dilemma.  I don’t have the stuff for tacos so I was thinking about spaghetti but I’m not a huge fan of the tomato sauce…

While writing this post I thought perhaps rice and broccoli would be good with it so I think that’s what I’m going to try, either that or spaghetti noodles with olive oil instead of tomato sauce.  We’ll see how it goes 🙂

Just a quick share from last week’s meal.  My homemade and super yummy spinach, bacon, mushroom pizza.  It looked so good when I pulled it out of the oven I was very proud of myself 😀

I bought a crust mix, cooked the bacon, brushed some olive oil and basil on the crust instead of using a sauce then just added the toppings: sliced mushrooms, fresh chopped spinach, bacon, green onions, and mozzarella cheese plus a sprinkle of fresh Parmesan at the end.  If I make it again I’ll add olives and fresh tomatoes.

Have a great week!

Monday
Lunch:  Chicken Caesar Salad
Dinner: Ground beef tofu with rice and broccoli *In case you skipped to the end see story above

This was me today and I don’t even know why.  It was like I just woke up hating the world for some reason.  I know it’s Monday but I really don’t feel like that’s a great excuse to turn into Grumpy Cat.

It sucks when I feel like this at work because I can’t hide.  The office is very social…it’s an office.  People walk by the hallway, mosey into your office when they feel like chatting, everyone chats in the hallway, and normally I love the social aspect of the job but today I was not feeling it.  Fortunately if there’s anything retail has taught me is how to smile when I mostly just want to scowl and sulk in a corner.

I made it through the day without slamming my door and hiding under my desk but it was a struggle.  I did everything I could think of to force myself into a good mood but nothing worked, even an afternoon trip to Starbucks to pick up an eggnog latte for the last day of their buy one, get one free holiday drink special only lifted my mood for about 20 minutes.  If a half price Starbucks latte can’t cheer me up I don’t know what will so I decided to write it out.

I think part of it is stress.  I’m feeling stressed about the upcoming holidays.

The possible drive home for Thanksgiving 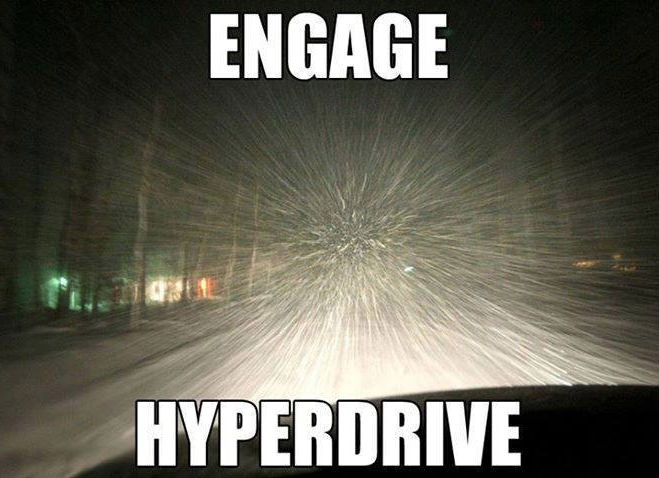 And the start of the new job.  Plus feeling this odd pressure about the future.  Despite my recent accomplishments I’m feeling like a slacker lately and I don’t know why.

This is me on the outside….

This is me on the inside…

I’m trying so hard to be cool and calm that I’m internalizing everything, which is making me feel worse.  I think what I need to do is acknowledge the stress, allow myself to feel it then recognize I have plans in place and everything will work out.  Writing about it is already making me feel better plus it’s tough to be too grumpy when you’re searching for gifs 😀

Hopefully I will be out of this grumpy mood tomorrow, otherwise it’s going to be a very long week….

Posts from the Past

do one thing every day that scares you

Enter at your enjoyment

From Wirral to Dublin

Daily mistakes and thoughts of a tired 20-something

It's OK to feel lost every once in awhile

and hello to AWESOME